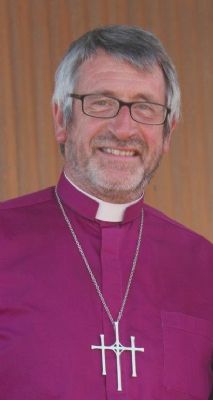 The 11th message to all in the Parish from Bishop Rob Gillion, who has been licensed as an Assistant Bishop in the Diocese of Lincoln and is half time Interim Priest in Charge of our parish of St John's.

Thoughts on the 75th Anniversary of the end of World War Two.

I thought you might be interested to learn what was written by a Norfolk  Vicar in his Parish Magazine in 1945. I believe it has some resonance with the ‘war’  against Covid 19. Questions arise then and now about suffering and death,  pulling together in adversity and honouring one another,  especially those on the ‘front line!’ The Vicar  knew it would be a slow recovery. Many would  have been isolated, away  from their families for months even for years and not in touch except by the occasional  letter. On their return it would be a new normal and I’m sure many would have found it difficult. The Vicar, I know, knew the Church would be the constant. He had tried to sign up but was told his strength would be needed on the home front. He stayed in that parish right the way through the war, in order to be there when they returned.  How do I know this?

Janine and I discovered the magazine while we were archiving and filing memorabilia during the lockdown. The parish is St Catherine’s in Mike Cross in Norwich. The Vicar’s letter was written by my Dad!! He was encouraging members of the Church on how to welcome members of the Armed Forces returning home.

We are of course celebrating this year the end of the Second World War, seventy five years ago.

Here is part of that letter:

When men and women leave the Services on demobilisation they are asked whether they wish to become attached to a Church, and if they do they fill in a form which is forwarded to the appropriate clergyman. I have  received several of these forms, and already some of the men and women have joined us in Church.

I should like to say to them that we welcome them very heartily. They have had a more varied experience than we have who have been left at home, and we shall be glad of their keenness and experience. I hope they will not be afraid to make suggestions about how we can make use of their services .

They, no doubt, will miss the comradeship of life in the Forces, the sense of belonging to a vast organisation, and the sense of having a purpose. I hope they will realise that all these can be found in the Church, but they have to be created as well as found. They have been used to Padre’s Hours, and Current Affairs lectures. These we can provide also. Some have been Confirmed while they have been away, and this has been to them a real and vital experience of God. If I may say so, these  are the ones who will come into the Church in the best way. The Church is not simply a club or a social institution; it is a community worshipping Christ, and living in accordance with that worship. As the hymn says, we aim to ‘live more nearly as we pray.’ The first thing we do is to worship together, then we think together, then we enjoy ourselves together, then we live out our lives separately and in families. Many no doubt, will have troubles and difficulties to get straightened out. If they were still in the Forces they would probably go along to the Padre’s  Office. Well, here the Vicarage is the Padre’s  Office, and I hope they will come and see me…

If civilian Church people ask what they can do to help, the first and obvious thing is to show Service people this letter, and give them every encouragement to come and join us.

New life comes from Christ, but He can bring it to us through new people; and we hope it will come now. A new era has dawned with the ending of the war, and for this we have already begun to thank God, and we shall go on with it by living in accordance with his will , showing forth our praise

The present time calls for convinced and whole-hearted Christians if self control is to be restored to men and women and nations in this chaotic world. Our religion is no mere hobby nowadays: it is a Crusade requiring devoted self-sacrifice, prayer and hard work, in which we join closely with others who are like-minded with ourselves.

Your sincere Friend and Vicar,

Could this not be a message for today too? A blast from the past , but one I think we can commend for our Church life in the present. To welcome each other and hopefully newcomers in the same spirit to our Church family when we get back together again, and especially pertinent for those who have joined for worship and prayer on our Church website.

Seventy five  years on, I believe it can be a message for a time such as this, especially  for those who have been away and might like to return to the fold. They would be most welcome!

Your sincere Friend and Bishop, in Christ.

Click below to read earlier messages from Bishop Rob

April Message for May Magazine